It was my husband who saw him first... 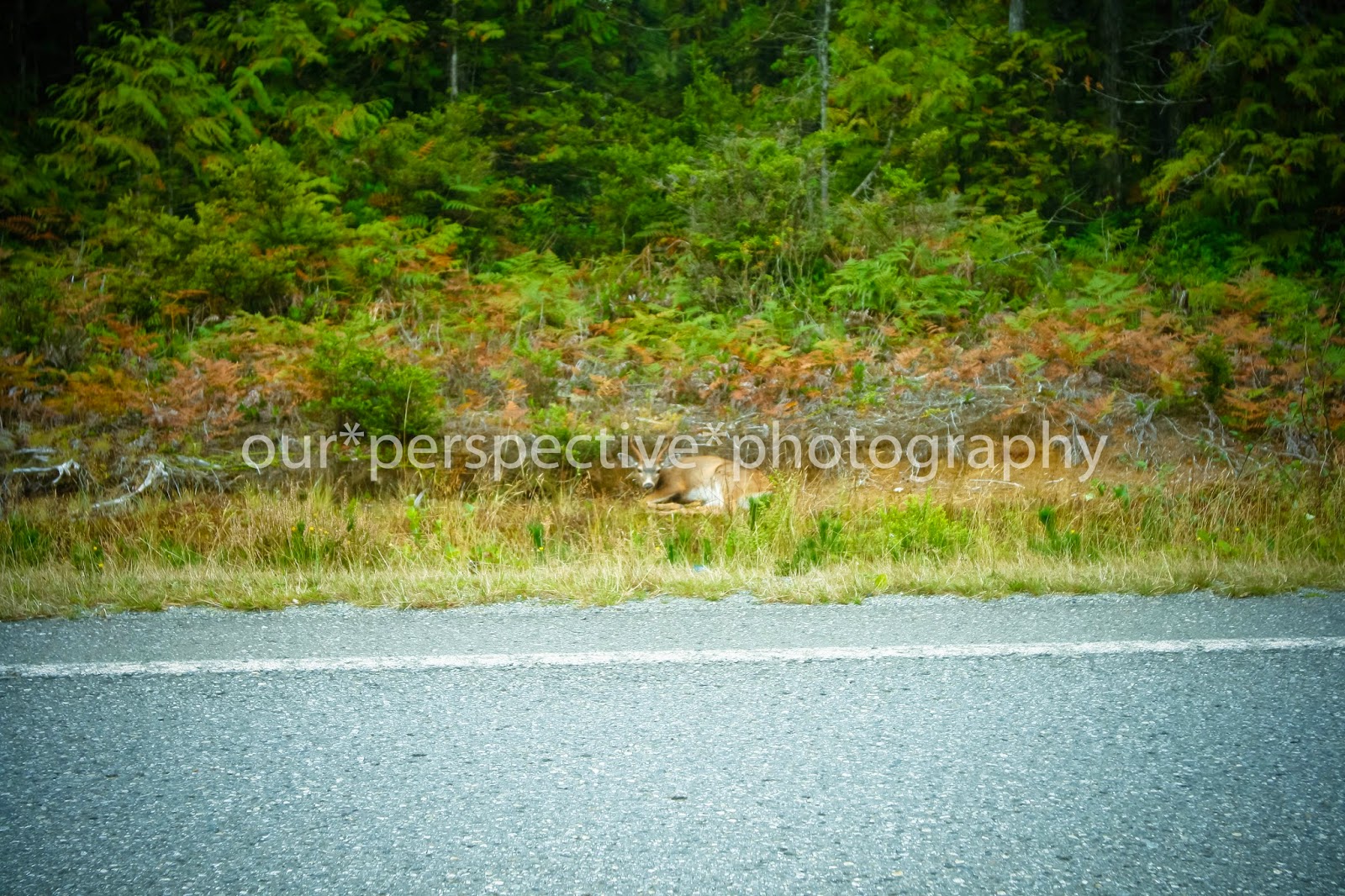 ...we were on our way home
after a wonderful weekend with The Young Blood
at his new home in Tofino.
I had not seen him since May
and time together had been greatly needed.
An amazing weekend was spent reconnecting
and enjoying Mother Natures glory
in this magical place.
Where Mountains stretch to the sky
Rain Forests run vast and wild
and Mama Ocean is fierce and wonderful....
and there He was
bedding down on the side of the only road
into or out of this sacred place...
the road that would take us back into the noise of living. 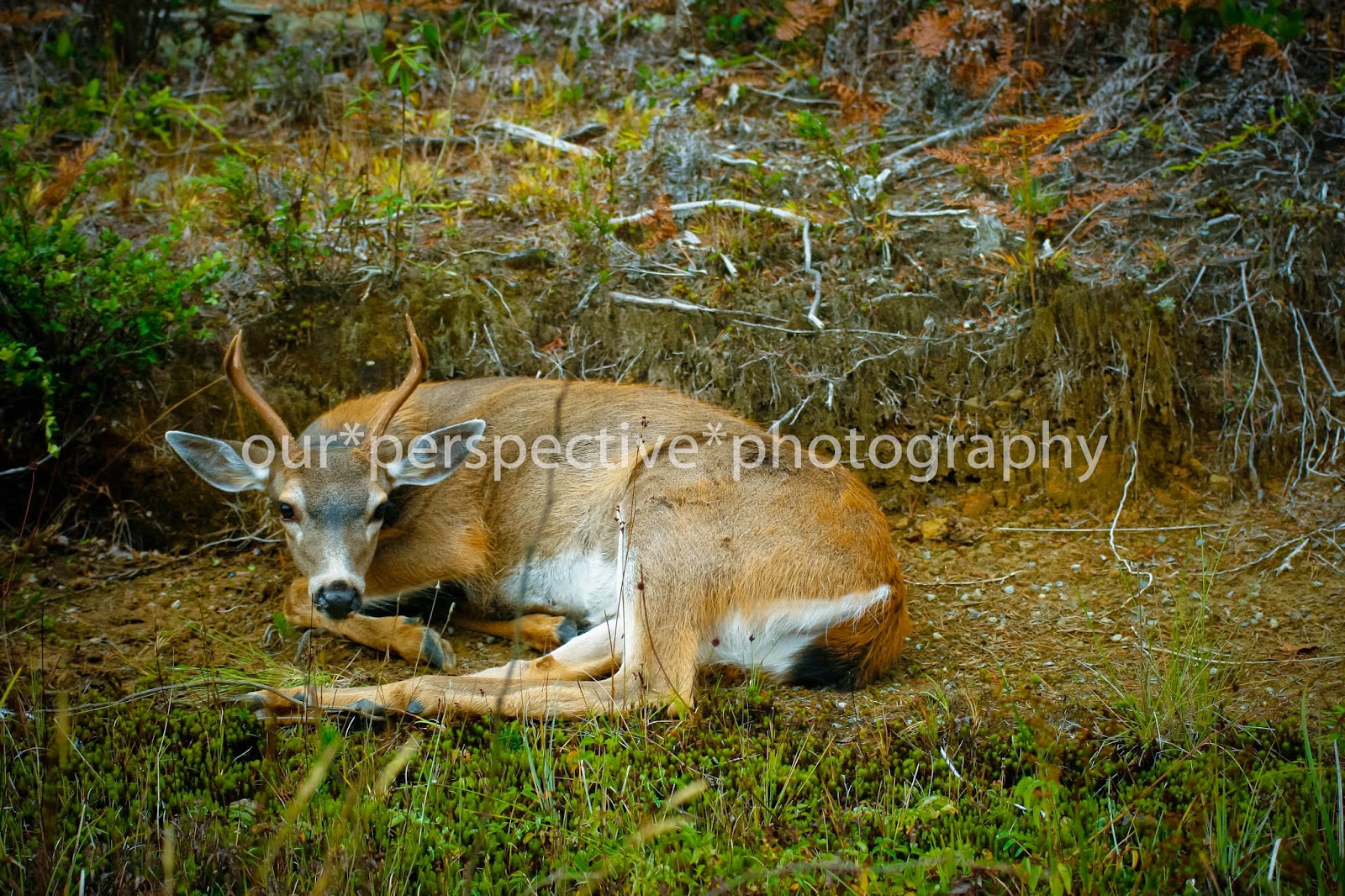 I had not seen him.
And longing to perhaps capture an image
I asked my love if we could turn around.
He sighed as there was a ferry to catch
and a tradition to be up held.
But as his heart is so,
he pulled the truck over to make the sketchy turn around.... 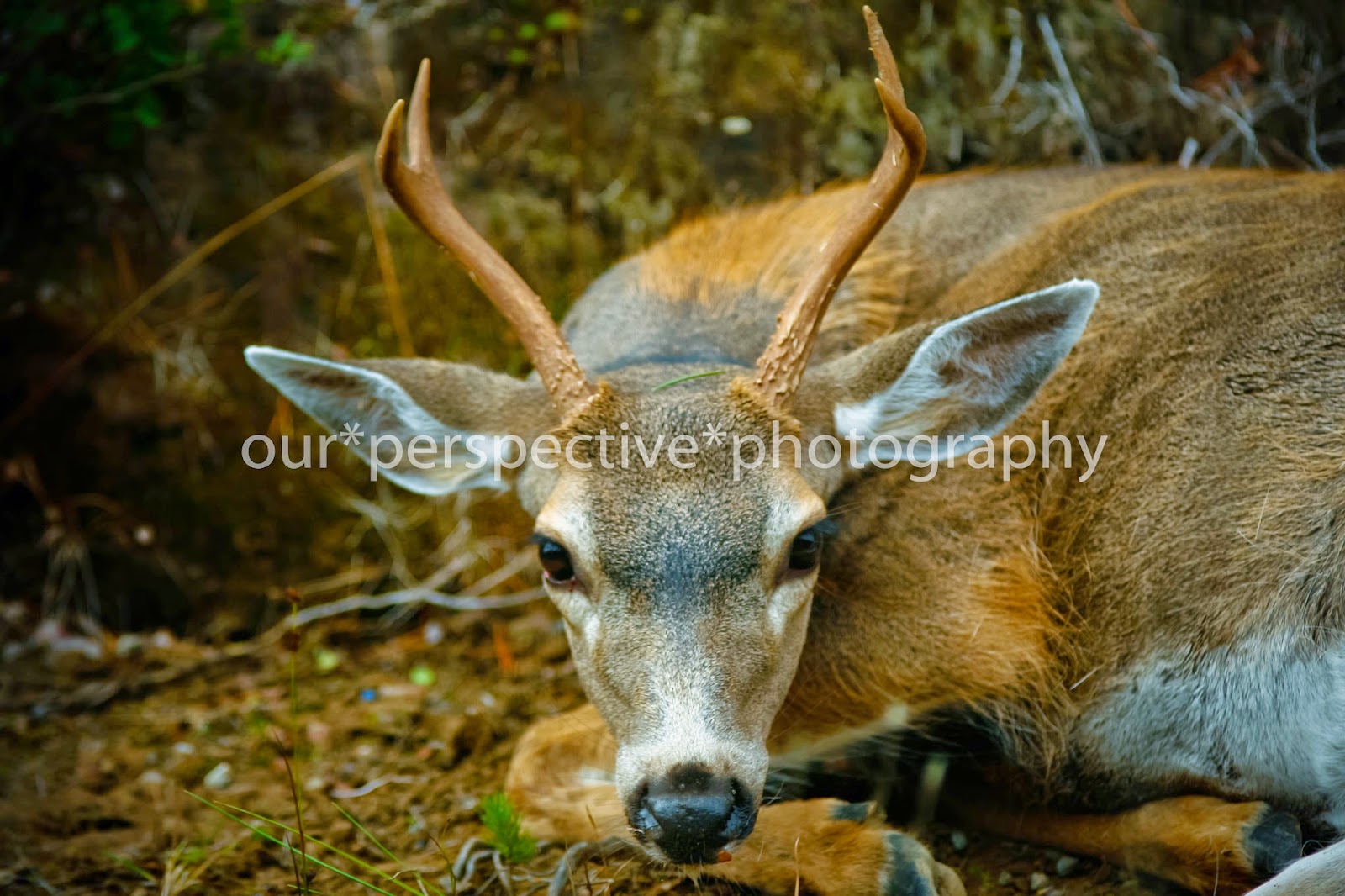 We drove up across from him
and pulled to the side of the road.
There he was blending into all that was around him
My love took a shot...wrong lens and too far away.
We idled for a moment watching him
and quickly it became apparent
something was not right.
We drove ahead to find yet another place to turn around
so we could be closer
and asses what exactly was happening
For He was not making any effort to leave
his precarious spot.
Even as the cars flew by, he made no effort
to retreat into the thick of the forest...
into the safety and cover of Mather Natures hug. 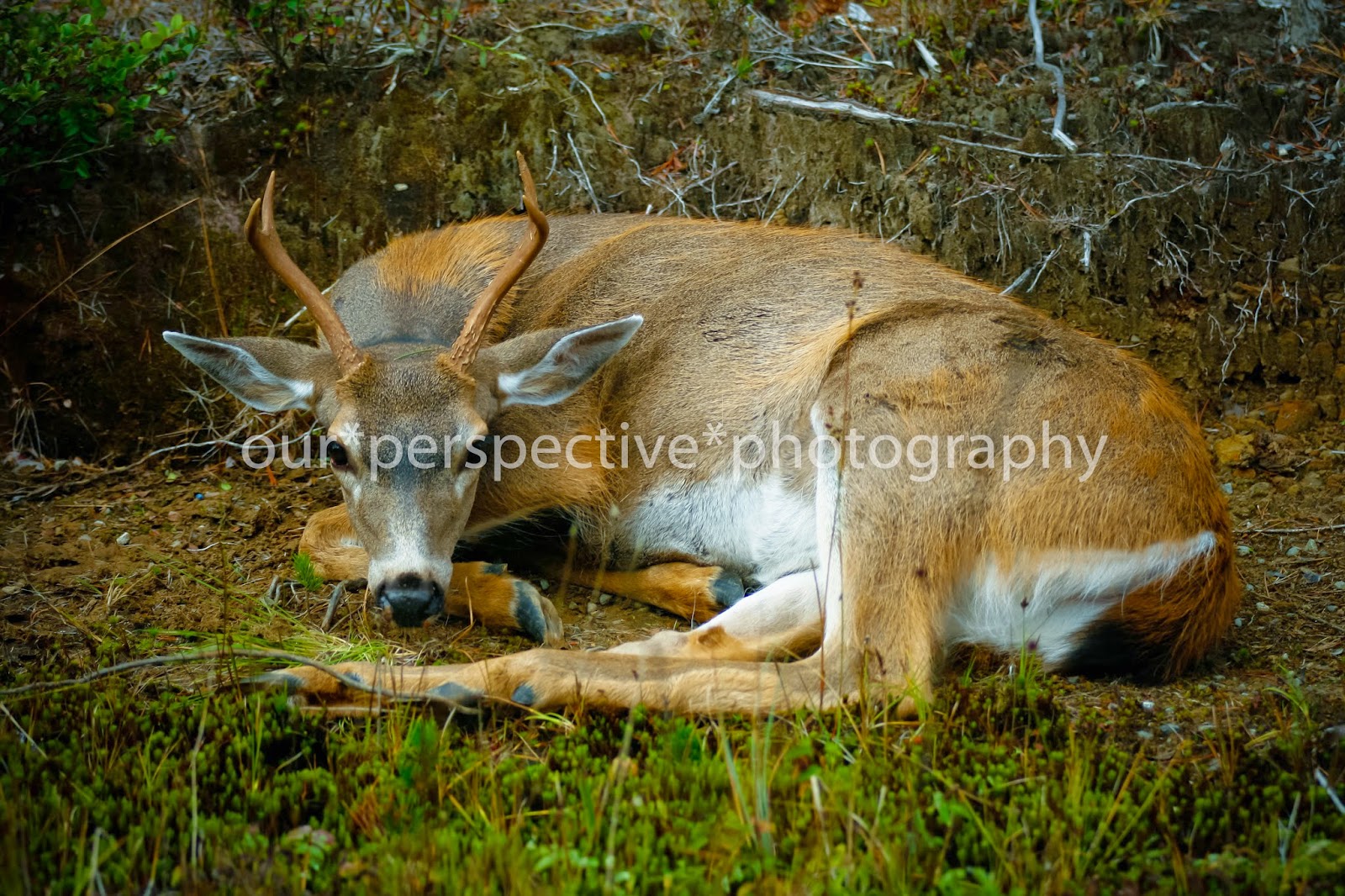 A dull feeling began to grow within my gut
and as we came back upon him,
this time on his side of the road,
I knew things were not right...
he had been hit
hit bad enough he could no longer get up.

He was stunning.
Beautiful in every sense of the word
I captured some images as I spoke to him.
He watched me closely
I longed to get out of the vehicle
and wrap my arms around his neck
but I did not.
And after I was done
we all just looked as him
knowing that being this close to him
observing him in this manor
was a sacred gift....
*
And then he began to speak to me.
*
As the tears rolled down my cheeks
He told me that even the most beautiful of things
must die...

He knew he was dying
and was completely surrendered to that.

The life-death-life cycle was part of his DNA
and he did not question it.
He peered into my soul and revealed to me
the death that was happening within me.
He spoke to me about letting what needed to die
die
and that by doing so
I would be making room for the new life
waiting to be born...
there was more
sacred things
held between The Divine and myself
things to be held within
my own sacred alter of my soul.

These few minutes I shared with him...
(I am not sure how long it was we lingered)
went straight to the core of my being.
The tears fully flowed as our hearts entwined.
He was suffering
and we knew we had to do something.... 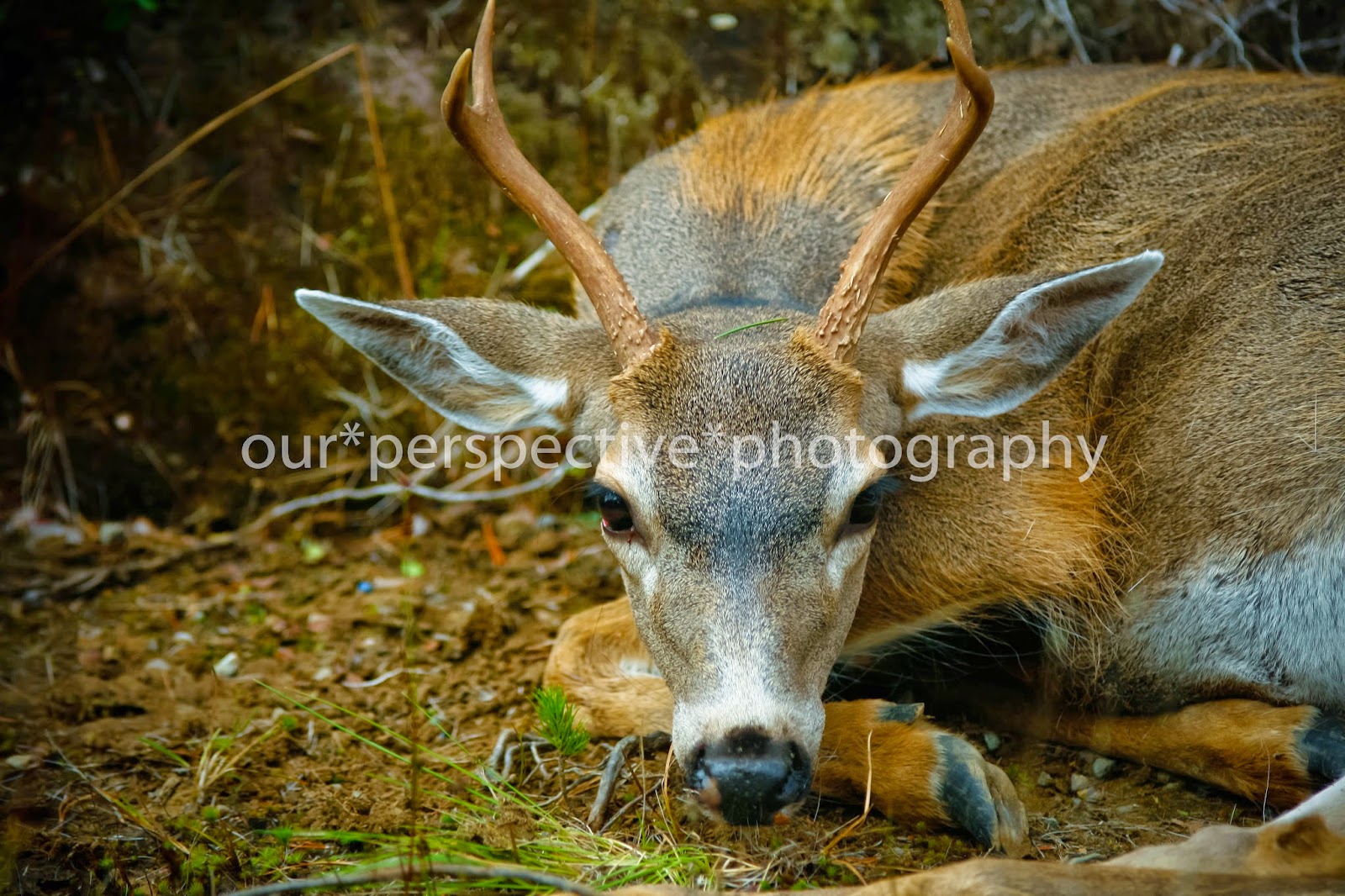 My husband made the appropriate calls
making sure someone would come
and see to this magnificent creatures needs...
I could not hold back the sobs as we pulled away
I felt my heart tearing from the top
to the bottom
Even now as I write this
the tears still come
this unexpected gift
this unexpected sorrow
To bear witness to the True Balance
To view a deeper reflection of this life
moved my heart so.

We continued onto our traditional stopping spot
before leaving
this our most favorite place...
and I poured my tears into Mama Ocean
Tears of sorrow
Tears of humility
Tears of gratitude
Tears of joy
So deeply moved am I
by the Divinity that Is
by the Deep Love that  is ours for the taking
for the Abundance of Giving
for the way we are each held
so precious
so important
so valid
to a Creator
whose Love reaches to the ends of infinity.

(this video was my second take...the first I was unable to contain my emotion)

*
More thoughts on surrender with deer...
Earlier in the year I took an embodiment journey with deer.
I entered her body and she took me into the meadow where she and her herd grazed. The stillness was beautiful, and yet within the stillness I heard every sound...
and I could hear how each how they each flowed together like a  choir, like meditation.
There was a deep peace and freedom within these sounds.
We stayed plugged into all that was going on around us
and yet
stayed in this place of still peace
I could not help but ask her how she lived in this unique kind of peace even though she was being hunted by man and other animals for food.
She told me she did not live in that thought.
her thoughts were about her herd, mating,
raising her young,
listening to the forest and nourishing herself.
She did not focus on the fact that she was hunted
until the time when she was being hunted came.
Then she would use her swiftness and knowledge of her surroundings to do what she could to continue in this life.
As she spoke I felt her level of
surrender and un-attatchment...
instead she carried the deep knowing
that all things here come to an end at some point
and in that knowing
she was, is and always would be.
*

"I have a new command for you. As I have loved you, so you must love others. "~Jesus


"Humankind has not woven the web of Life. We are but one thread within it. Whatever we do to the web, we do to ourselves. all things are bound together. all things connected." ~Chief Seattle, 1854
If ever there comes a time when the women of the world come together purely and simply for the benefit of mankind, it will be a force such as the world has never known."~ Matthew Arnold

"The world will be saved by the Western woman....Some people will call me a feminist...but we need more effort to promote basic human values-human compassion, human affection. And in that respect, females have more sensitivity for others' pain and suffering." ~Dalai Lama
"All changes, even the most longed for, have their melancholy; for what we leave behind us is a part of ourselves; we must die to one life before we can enter another." ~Anatole France
Out beyond ideas of wrong-doing and right-doing, there is a feild. I'll meet you there. ~Rumi
"Those who seem to know more truth than you simply reflect the part of you that has forgotten. They are your touchstones to remember." ~Alan Cohen
"We do not grow absolutely, chronologically. We grow sometimes in one dimension, and not in another;unevenly. We grow partially. We are relative. We are mature in one realm, childish in another. The past, resent, and the future mingle and pull us backward, forward, or fix us in the present. We are made up of layers, cells, constellations." ~Anais Nin
"Process is more important than outcome. when the outcome drives the process we will only ever go to where we've already been. If process drives outcome we may not know where we're going, but we will know we want to be there." ~ Bruce Mau